a tale of tails, tenacity, and tedium, as told by me, usually barefoot and bellowing 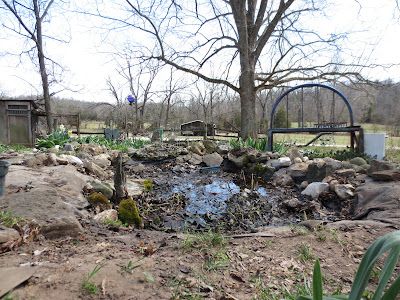 I began removing rocks with the idea of consolidating two water gardens.  I had my work cut out for me. 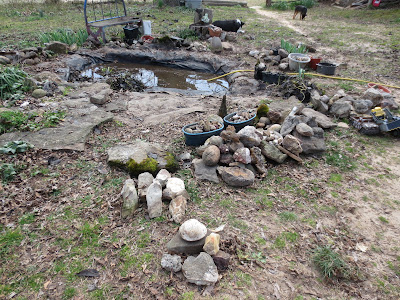 How many rocks were around and in this water garden?  I'm not counting.  I first made this water garden for Dad after Mom died. I used his rock collection and added more as the pond progressed.

Dad  would sit for hours watching the goldfish swim until he decided to rebuild the pond.  He dug canals circling the pond and to the fence line. There he constructed an earthen dam.   I didn't know what he was doing unless maybe he was routing an overflow path for flood waters.  I let him work.  The garden was for him.  He rounded mounds of dirt over the rocks and patted it into to place until he had the perfect dirt banked stock pond.  He had Alzheimer's.  It was his yard and his pond.  He was enjoying himself.

After he was gone I excavated the rocks and put it back together.  The fish had disappeared but there were frogs.

During the years Marcy has added lilies and parrot grass and planted surprise flowers around the garden for all to enjoy.  The pecan tree leaves fill the pond every fall so I usually deep clean it twice a season.

This season I had decided to combine my two gardens.  I began to remove the rocks...alllllll the rocks.  Picking our leaves and pecans as I cleaned the pond. 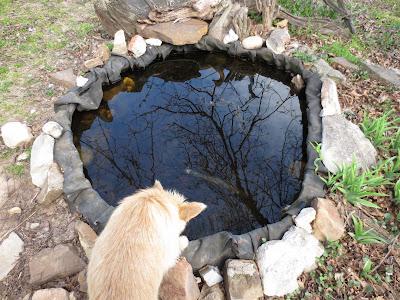 Here's the tractor tire water garden after a winter of animals and weather.  I saw bull frogs so the plan changed.  I could not empty this and lose my bull frogs.  The Blue Herons have almost decimated the bull frog population in our large ponds. I decided I'd just clean this one more year and then re-access...later after the eggs hatched and the new frogs were ready to be moved.

So back to Dad's water garden which I had almost completely disassembled.  A surprise awaited me there too. 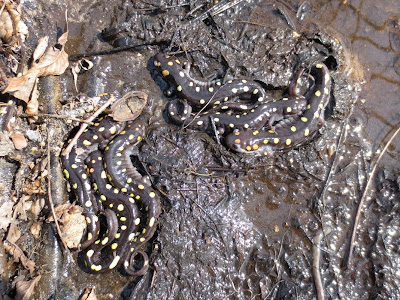 Nestled under a rock was a "nest" of salamanders. 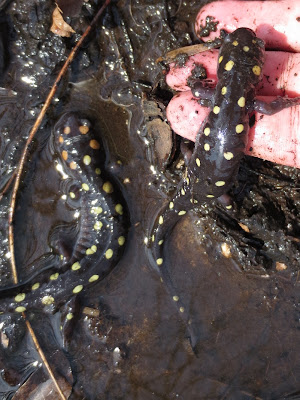 I love these creatures. 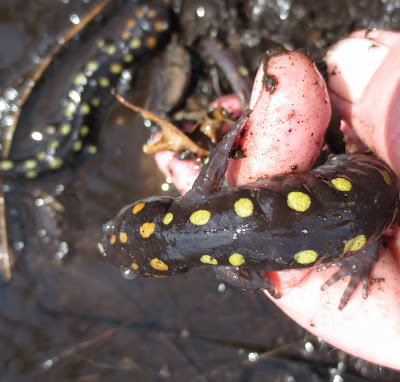 Again, I could not wreck their home. 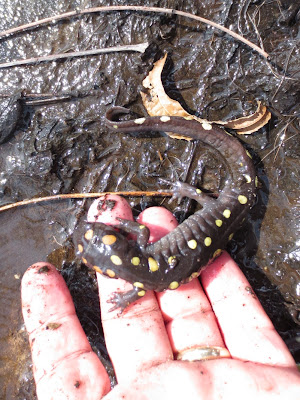 You know a woman made water garden is good
when the wildlife moves in. 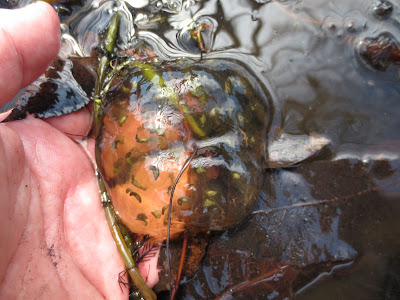 In this dark mess I found eggs 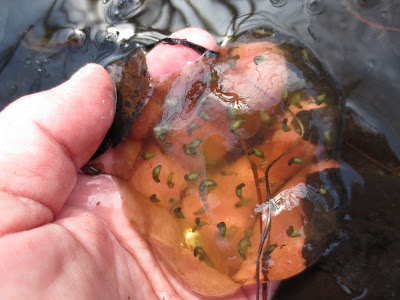 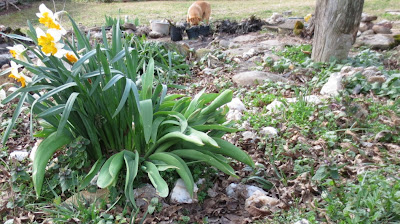 Spring has arrived at the water garden 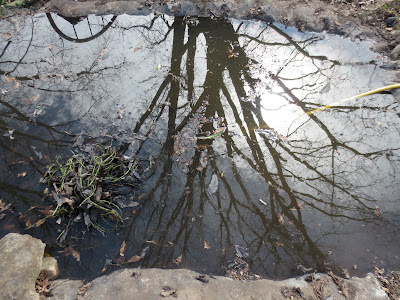 I didn't reflect for long.
The wildlife shall stay.
I remove the debris and add water.
I shall replace the rocks making it pet friendly.
The rock garden that began as Dad's will remain
one more year.
Posted by Gail at 3:30:00 AM

Gee, that sure was a lotta digging and moving of rocks, until you discovered bullfrogs n salamander's. Glad you just put it all back until the "babies" are born. I never saw salamander eggs before, if that is what they are - beautifully coloured too. Nice post Gail and great photos.

It looks wonderful ! Oh all the wild life in and around is awesome ! Great job . Spring has sprung there , not here yet it is windy cold and we are to get snow , rain and freezing rain here today ! I hope spring shows up here soon ! Thanks for sharing your lovely water garden with us ! Have a good day !

i am glad you left all the wildlife, love those salamanders, i have only seen them in aquariums... that was a lot of work. the frogs will thank you i am sure.. love the reflections in the pond...

Morning Gail, great for you to leave the Salamanders...they are so pretty, wonderful to have creatures around I think.....Hope you get more Bull frogs, not many here, :( Blessings Francine.

Bullfrogs are scarce here as well! My back hurts just hearing of all that rock moving.

awesome find on the salamanders! so cool! glad you will not disturb their home. :)

Being a rock hound and also "critter" lover, the work you did sounds like a fun adventure. Discovery like that is a grand way to forget the real world things. Obviously, here in the desert we don't have salamanders but we do have toads and frogs. Not the big jobbers like you do but a day spent like that....sounds and looks like heaven to me. Oma Linda

I know what you mean. Once the wildlife moves in it's hard to make changes.

what a cool find...I want a pond...I have a ton of rocks...gonna have to talk to the Hubby about this...

Those are some big salamanders!

I'm not holding my breath, but I can't wait to uncover and delight in some outdoor finds too....what a marvelous post- !

I'm not holding my breath, but I can't wait to uncover and delight in some outdoor finds too....what a marvelous post- !

I love this post! It takes me back to my childhood in Texas! I love it! Thank you!

Gail your creatures look lovely, i just love pond life with all its visitors. Have a good week x

Me thinks your Dad would love it once again...as is...with whatever critters hatch!...:)JP

Far Side of Fifty said...

You found lots of wildlife:)

Must be good water with those salamanders in there. I used to hike with my dad up in the mountains and each mountain spring we found he would check for salamanders. If they were in there he said the water was safe to drink. But I was never thirsty enough to drink the water !!
Blessings
Marilyn

You found such nice things. I would like to see all of them. The other day I was thinking to myself how I miss the sound of bull frogs.
What a lot of work but what a lot of reward.

I love how you love and respect all the critters big and small that share your land. I have to admit those little spotted salamanders are kinda cute! :-)

What a wonderful surprise your dad left you, Gail. :-)
Maybe the blob was Salamander eggs? I don't know much about Salamanders.
Hope you're doing well!
Your gardens are looking great. Have a wonderful week! ♥

So cool, and I love your respect for animal life.

But of course you wouldn't disturb their nest. Not you! :) And that is why we all love you, Gail! 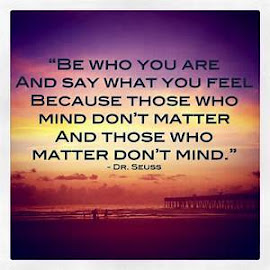 Gail
Melbourne, Arkansas, United States
A simple country girl raised on a farm and returned to the farm. I love family, writing, painting, reading, animals and the land.

Let us walk softly on the Earth with all living beings great and small remembering as we go, that one God, kind and wise, created all.

"If you truly hold a stone, you can feel the mountain it came from." 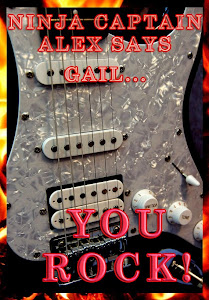